Continues as a Cabinet Minister in Dr. Sampurnanand’s ministry after G.B. Pant’s departure for Delhi 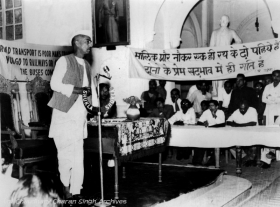 “After Pant’s departure for the Center, however, Charan Singh lost control over both the relevant portfolios and consequently the power to steer policies in the direction he preferred.” Paul R Brass, An Indian Political Life, Volume 1. pp 125.

Appointed Minister for Revenue and Transport in the government of Dr. Sampurnanand on 28 December, till 9 April 1957. Refuses to accept recommendation from Planning Commission to allow Zamindar’s to resume land from tenants, passes an Amendment that no land owner would lose land already in his possession.

Writes to Jawaharlal Nehru (22nd May) for making inter-caste marriages compulsory for gazetted officers as a step towards dismantling the caste hierarchy of Hindu society.