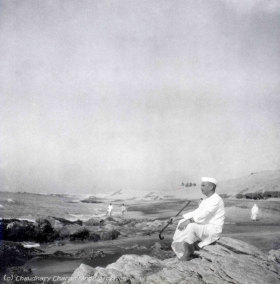 At the 64th session of the All India Congress Committee in Nagpur in January, Charan Singh gives a one hour-long well-argued and hard-hitting speech against cooperative farming as a system ‘wholly unsuited to Indian realities’. Vigorous clapping follows his impassioned speech, but the official resolution on Co-operative Farming is passed unanimously nonetheless. None dare oppose Nehru, now at the very peak of his power and authority. Collective or co-operative farming is a Nehruvian dogma of the times to supposedly increase agricultural production, and anyone opposing this is considered a ‘reactionary’ by Prime Minister Nehru enamored as he is of this socialist pattern of land holding. This endears Charan Singh to some of his constituents, but puts him in the doghouse with Nehru and the central leadership of the Congress.

The subsequent death of Cooperative Farming in Soviet Russia and Communist China is a validation of Charan Singh’s foresight and knowledge of the Indian peasant, indeed any peasant, and a severe indictment of Nehru’s short-lived passions.

Resigns from the government of on 22 April on multiple inter-linked issues that have been simmering since 1954 and even earlier: his frustrations with politics and politicians, the ineffectiveness of an increasingly corrupt government machinery, urban and business bias of state polity, the individual incapability of Chief Minister Dr. Sampurnanand, the capitalist Sahu Jain and Birla’s Hidalco issues, and the sidelining of Charan Singh in factional politics of the state Congress organization. Sits out of the government, for the first time since 1937, for 19 months - from 22 April 1959 to 6 December 1960.

“Charan Singh makes clear first that the issues between him and Dr. Sampurnanand on these arrangements reflect the fundamental differences in their respective assessments of the needs of the country, whether its salvation lay in improving agricultural practices and increasing production or in industrial development. .. Statement which was proposed to be made in the assembly on 21 August 1959 but which never came off … is an extraordinary document, 52 pages in length … it is at times brutal, a others analytical, eloquent throughout its critique of the policies of the development state. There can have been few statements of this type written with such sophistication, clarity, and dedication anywhere in India at this time”. Paul R Brass (2011) An Indian Political Life, Volume 1. pp. 149-150