The Tewatia clan grows its influence in Ballabhgarh, Faridabad in present day Haryana. Nahar Singh, an 1857 revolutionary, is hung by the British for his role; his clansman Badam Singh leaves for across the Yamuna 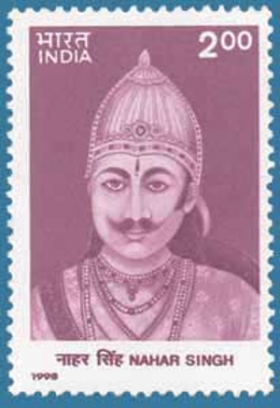 The Tewatia’s, a clan of the hardy peasant Jat community, live in village Sihi, district Ballabhgarh to the South of Delhi in the modern day state of Haryana. They come into their own after the contraction of the authority of the Empire after the death of Aurangzeb, the last great Mughal Emperor. Gopal Singh is given the responsibility to collect revenue on behalf of the Mughal court for a 1/16th share, and thus starts the story of the ascent of his clan.

Over the course of the next 150 years, the Tewatia clan grows its local influence. Gopal Singh’s descendant Nahar Singh (1823-1858) becomes the chieftain, or Raja, of the small state of Ballabhgarh (with 121 villages) and play a revolutionary role in the 1857 War of Independence. Captured and hung by the British on Delhi’s Chandni Chowk along with 17 co-conspirators, his unsuccessful revolt sets off an exodus of his clansmen to villages a safe distance away from Ballabhgarh to (it is said in family mythology) avoid the depredations of the British forces.

Badam Singh, one such clansman, leaves Sihi village looking for new opportunities and he moves to Bhatauna village 60 kilometers away from the Yamuna, another clan village, halfway from Sihi to the great Ganga river. He has five sons, the eldest is Lakhpat Singh, the youngest Mir Singh.