Differences continue with the establishment Congress 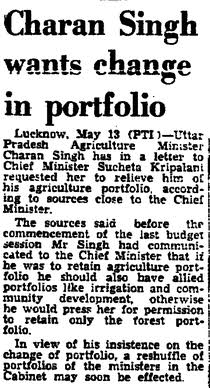 Agriculture portfolio taken away on 14 May. Holds Forests and Local Self-Government from 14 February 1966 till 13 March 1967. Even when holding the unimportant LSG portfolio, he continues to implement his beliefs in administration.

He had in his mind, in fact, “to make an example of certain highly-placed-corrupt officials so that servants of local bodies all over the state may take heed”. …. “Today, standards of public life have greatly slumped. In fact, no standards, worth the name, are at all left. Instead of being an opportunity for public service, offices of public responsibility are regarded, the eyes of an unduly large number of persons, as a source of profit and self-aggrandizement. If this state of affairs continues unchecked, the State of Uttar Pradesh will go down irretrievably. Rather than be dismayed by any risks that public life in our conditions has increasingly come to pose, I would unhesitatingly take the action that I propose…” on the suspension of a member of the Meerut Municipal Board in 1966. Paul R Brass (2011) An Indian Political Life, Volume 1. pp. 149-150

And his views on the agitation of the lower grade of government employees for higher wages and Dearness Allowance.

“If a probe is made, it would be found that the amount of emoluments that Government employees all over the country are drawing have, in the total, played not too mean a part in creating the economic crisis that we are faced with to-day. Government servants (along with organised labor) have come to form a privileged class completely divorced from the masses: The emoluments of this class have no relation with the per capita incomes of the people they are supposed to serve: There is no correspondence between the life of the two -- the life of the servant and the life of the master.” Extract from a cabinet note to Sucheta Kripalani, 30 June 1966 on the UP State employees agitation

“Some of the questions that fall for consideration, are whether there should or should not be some relation between the average incomes of our people and the emoluments of public servants. Have needs of Government servants alone to be taken into consideration and not of those from whose pockets the resources for meeting such needs, are ultimately derived? When prices rise or shoot up, it the comparatively ill-paid employee entitled to greater financial assistance or the better-paid employee? Should highly-paid officers at all be given any D.A.? …. the gap between the incomes of our people as a whole and their servants, is becoming wider and wider.” Extract from letter to Prime Minister Indira Gandhi, 27 July 1966 on the UP State employees agitation

“All the emphasis since advent of Independence has been on rights emoluments, benefits, concessions to labor and so on, while hard work or performance of duty has been nobody’s concern ad has become a rare virtue. The factory labor in Inida produce far less, and receives more, than in the West. Most undoubtedly this is one of the causes of the economic malaise in which the country finds itself today.” Extract from letter by Charan Singh to T.N. Singh, Union Minister of Iron & Steel, 18 August 1966