Becomes the center of political opposition to Indira Gandhi, but after her assassination loses 1984 elections to Rajiv Gandhi in a landslide sympathy vote. Remains engrossed in the affairs of the nation, vigorously and publicly opposes Sikh extremism. 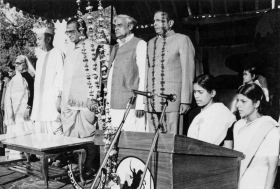 1984 October 31. Indira Gandhi assassinated by her Sikh security guards. Rajiv Gandhi wins Parliamentary elections in December with the biggest ever majority in Indian history of 411 seats out of 542.

Before Indira Gandhi’s assassination, dissatisfaction with her regime brought Charan Singh once again to the center of a realignment of opposition forces. Elected to Parliament for the third, and last, time from Baghpat with only 3 Members of Parliament. All opposition swept away in the ‘sympathy wave’ for Rajiv Gandhi. Once again, and for the last time, Indira Gandhi worsts Charan Singh.