Becomes Chief Minister of UP for the second time, with the support of the Congress 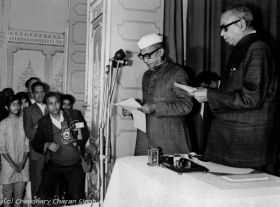 Becomes Chief Minister of UP for the second time on 17 February until 29 September with the support of Indira Gandhi’s Congress (R) after both factions of the Congress approach Charan Singh to form the government. The alliance between the two parties broke on the issue of Charan Singh’s refusal to merge the BKD into Congress (R) and also because three Rajya Sabha members of his party voted against Indira Gandhi’s initiative to eliminate the privy purses of the Indian princes.

Dissolved all 51 Zila Parishads on 28 April, on charges of corruption.

“ Mr. Charan Singh … had performed the miracle of reducing communal riots to zero in the notoriously communal riot-prone state of UP. .. It was done by enforcing the law of the land. Anyone who threw a stone maliciously was arrested, prosecuted and on conviction was sent to jail with no remissions and higher class for the so-called political prisoners.” pp. 28

“ I had the opportunity to know the attitude of Charan Singh towards law and order in UP during three periods from December 7, 1960 to February 1962 when he was the Home Minister of UP, from April 1967 to February 1968 when was the Chief Minister, and from February 17, 1970 to October 2, 1970 when he was the Chief Minister for the second time. On the first occasion, I was the DIG of Meerut range, the home ground of Charan Singh. On the third occasion I was his chief of UP Police. On all three occasions, Mr Charan Singh showed no leniency to law-breakers. The press, for some reason or the other, was hostile to Mr. Charan Singh and it would publish bold headlines of Jats indulging in lawlessness against any section of the population, especially Harijans. In any such fact or story came to Mr. Charan Singh’s notice he would never let the police rest till the culprits were safely lodged in jail without bail. … I have no doubt if Mr. Charan Singh were the Chief Minister of UP, Mr. Mahender Singh Tikait would have stopped preaching lawlessness or would have been in jail. Mr. Charan Singh’s declared policy was never to give any higher class in jails to such prisoners.” pp. 52-53

“Early 1970: I was the chief of UP Police and Mr. Charan Singh was the Chief Minister. Quite a few of his unruly followers, chiefly Raj Narain, threatened to disturb the meeting of the Prime Minister. The Chief Minister told us in no uncertain terms that we were free to arrest any of his followers if they were a threat to the PM’s security. As a result, looking after the PMs security became an easy task”. Pp 126

“ The best anti-corruption legislation is the Uttar Pradesh Public Men Enquiries Ordinance of 1967, enacted by Mr. Charan Singh when he was Chief Minister of UP...the only correct attitude in this respect was that of Mr. Charan Singh who declared in a public speech that if the Home Minister was himself corrupt how could he object if a traffic constable accepted money from a guilty motorist”. pp 179