Breaks away from the Congress, after 38 years. Becomes Chief Minister of Uttar Pradesh 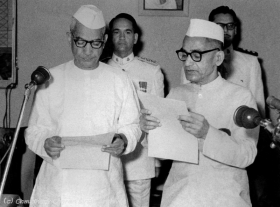 Breaks away from the Congress along with 17 MLAs after negotiations with Indira Gandhi reach an impasse, calls it a betrayal and forms the Jan Congress on 1 April. This was the first of many instances when Charan Singh’s political paths crossed with those of Indira Gandhi, and in most instances she out-maneuvered him with superior Machiavellian ease though he did ‘win a few battles along the way’. (Paul Brass)

Charan Singh is unanimously elected as the leader of Samyukta Vidhayak Dal (SVD) 1, a joint organization of multiple opposition parties. Becomes the first non-Congress chief minister of UP from 3 April 1967 until 25 February 1968; and starts the historical process that led to the rise of the so-called Other Backward Castes (OBCs) as the pre-eminent political force.

(After the 1967 Parliamentary elections, a meeting of non-Congress chief ministers and other important leaders is held at New Delhi on 9th April on the initiative of Humayun Kabir to form a national alternative to the Congress. All the leaders present agreed in principle to form an all-India party and M.P. Sinha, the then Chief Minister of Bihar, invites all Chief Ministers of non-Congress states, presidents and secretaries of like-minded parties in the opposition from different states to meet in May 1967 at Patna. A decision is taken to form the Bharatiya Kranti Dal (BKD), and M.P. Sinha elected its first Chairman. Charan Singh elected a member of the Executive, later merges his Jan Congress into the BKD and takes on the Chairmanship of the party which increasingly becomes UP based over time.)

“Corruption has grown manifold. I hold the politicians responsible for this, not the bureaucrats. My experience has been that the political leadership defines the actions of the officers, they react quickly to directions: it is like the horse and the rider. The horse very rapidly understands whether the rider on his back knows riding or not, and drops him immediately if he rider does not … corruption starts at the top, not from the bottom.” Interview with Shyam Lal Manchanda, Nehru Memorial Museum & Library Oral History Project, 10 February 1972. Lucknow, UP.