Charan Singh elected for the 2nd time, to the UP Legislative Assembly. Appointed Parliamentary Secretary to the Chief Minister Govind Ballabh Pant 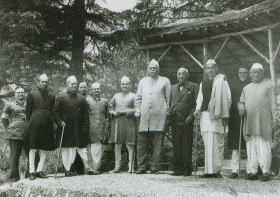 Elected to the UP Legislative Assembly again from Meerut District (South-West). Fought elections with funds collected from the public, did not accept money from the wealthy - this becomes his hallmark his entire political life.

Serves as Parliamentary Secretary till 1951 under the Cabinet Minister for health, local self-government, and finally the Premier (as the Chief Minister was called then). Becomes a member of the All-India Congress Committee (AICC). Amends UP Tenancy Act to provide shelter to stop eviction of tenants from the land they tilled, and all those evicted from 1 January 1940 are reinstated.

Becomes aware of the weaknesses of the Congress organization – upper caste urban leadership, casteism, opposition based on personalities, self-seeking, lack of unity, and oppressing the weak - and the involvement of the committed workers of the Congress in agitational methods to the exclusion of knowledge of the problems and a vision of the solutions of India’s many deep-rooted problems