Joins the Cabinet of U. P. Chief Minster C. B. Gupta 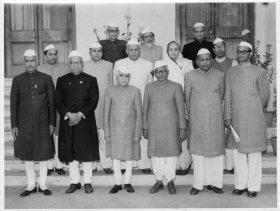 Joins the Cabinet of U. P. Chief Minster C. B. Gupta on 7 December as Minister for Home and Agriculture. Home portfolio taken away on 13 March 1962 due to differences with the CM, continues as Minister for Agriculture till 1 October 1963. Imposition of Ceilings on Land Holdings Act of 1960 passed by UP Legislative Assembly in which he took keen interest.

“(Charan Singh) …. Says that Agriculture Ministry is a very truncated affair, that the process of truncation was begun under Pant, and continued under both Sampurnanand and Gupta”. Interview in Lucknow with Paul Brass, April 21, 1962.